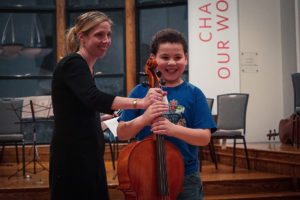 In January we had our Instrument Giving Ceremony- where our Green Group students received their instruments for the first time. They spend the fall on pre-instrument work: singing, solfege (“do re mi”), bucket drumming, reading music, and even creating and decorating paper practice instruments. By this time, they are eager to learn to play string instruments! 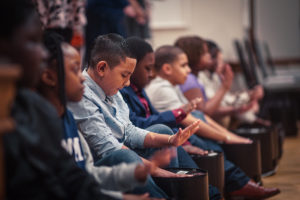 They are so ready – knowing that this is their very first step in a long, rewarding journey toward music-making. Students like Elias and Genderson, aged 9 and 10, who arrived in 2018 from El Salvador, are overcome with happiness to receive a cello and violin. There were smiles, tears, and even a speech from Worcester Mayor Joe Petty, who honored us with his attendance. 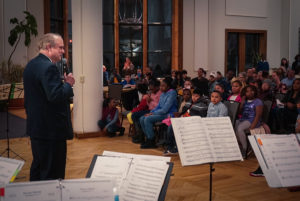 We congratulate the older teens the NS Club, our teen leadership group, for winning a grant for a Youth-Led Project from the Massachusetts Cultural Amplify Program. The teens dreamed up a project in which they would bring in a music specialist to demonstrate and instruct them in Baroque performance practice. In addition, they will visit the rare instrument collection at the MFA and present a public showcase of their music.

Our free annual family concert proved to be a crowd pleaser again. We sold out early and packed the house with an enthusiastic audience of all ages for Sergei Prokofiev’s “Peter and the Wolf,” the musical fairy tale set to music as a that is a popular introduction to classical music for kids.

Worcester Chamber Music Society musicians played while Rohan Gregory narrated the piece, and Neighborhood Strings opened up the concert. To complement Youth Art Month we projected pieces by local art students on the big screen during the musical performance. The art not only punctuated the story, but showcased some excellent pieces by students from Worcester’s Chandler Magnet Elementary School.

When we reached out to Ann Rokosky, visual arts educator at Chandler Magnet, she was enthusiastic about working with us on the show. Plus, a parent of one of the students had been attending the annual concert for years with her Girl Scout Troop and urged her to get involved with us.

Rokosky shares our belief that Youth Art Month is important to communities, and gives students a chance for their voices to be heard outside of a school setting. By pairing it with our music, the school and the artwork got out to a whole new set of eyes and ears and enhanced the telling of our musical story.

“I appreciated the opportunity to work in tandem with something musical,” Rokosky told us. “Over the past two summers, I have spent some time volunteering and working with the BSO’s Days in the Arts, (DARTS Summer Program). While at DARTS I was able to be reminded of and see that an extraordinarily powerful connection can be made when all of the art forms work together (visual art, music vocal and instrumental, dance and drama). I think that music and visual art truly complement and make each other stronger when paired.”

The artwork that visually strung through the Peter and the Wolf family concert was done by the 4th, 5th and 6th graders at Chandler Magnet, and were in both 2D and 3D forms. The works were photographed and projected on the screens during the performance, and ten boards were on display in Mechanics Hall.

WCMS delivered Prokofiev’s most frequently performed work through music and narration, and the youth of Worcester brought it further to life with art

One of the most exciting times of the year for us is when our Neighborhood Strings student musicians receive their instruments! They walk in regular people…and walk out as proud musicians.

Our Education Director and head of Neighborhood Strings, Ariana Falk, said it best that when they receive their instruments for the first time, it’s incredibly exciting and gratifying. “The instrument is like a symbol of the effort and commitment they have already made, but also of so much possibility and creativity. There is so much potential to be creative in those pieces of wood, and so many things to explore. They also feel the trust we are putting in them by giving them these fragile, art-like instruments.”

Surrounded by their families and supporters, the students – most of them from Main South – beamed with pride. For them, receiving the instruments represents much more than having that violin or a viola to finally create music on; it’s a culmination of weeks of preparation, instruction and background of those instruments. Since November, the students, ranging in ages 6-12, attended an after-school program at Woodland Academy two to three times a week to learn music fundamentals. Before the holidays, these students practice their postures and positions by holding cereal-box violins and dowel bows, prepping for the real thing.

Both 10-year-old Boen and nine-year-old Caleb said they were going to try to “see if they can play it” the minute they got home that night. The two student musicians were among 11 who received their instruments in the sixth annual ceremony for Neighborhood Strings.

If you’d like to learn more about our Neighborhood Strings program, contact Ariana Falk, Education Director for the Worcester Chamber Music Society at Ariana@worcesterchambermusic.org.

We are making a difference
Posted December 15, 2018

One of the most moving things to witness as a teacher is when students take off with the material we give them and widen their own worlds. One longtime Neighborhood Strings student, Peter K., has been doing that this fall in an inspiring way.

Peter has been playing the viola since the very beginning of Neighborhood Strings, as a fourth-grader. As a student of “big Peter” Sulski, he has really taken off, reaching a level of comfort and joy on his instrument that has allowed him to move onto harder and more satisfying music.

Now a high school sophomore, Peter has come to ChamberFest (our music camp) three times and played works by Corelli, Handel, Mozart alongside advanced players his age and older.

Most exciting – this fall, he took on the challenge of playing in Clark Sinfonia, a college-level ensemble, where he played the entire program last month as a member of the viola section.

I loved watching him sit with the college students, studying his scores and standing proudly on the stage of Razzo Hall. Any younger Neighborhood Strings student can simply look at Peter to see how music can send them on an amazing journey.